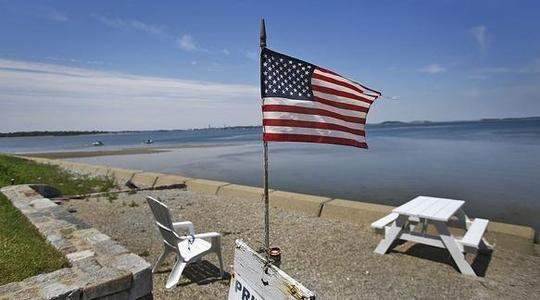 Adams Shore is located on Quincy Bay at the entrance to the Hough's Neck peninsula. It is bordered on the north by Quincy Bay, on the east by Hough's Neck, on the south by Town River Bay and on the west by Merrymount .

Adams Shore is a beautiful family neighborhood of mostly single family homes.  The population has been going through a transition and is once again home to many young families.  With both a park and a beach in the neighborhood, you rarely drive down the street without seeing a familiar face enjoying all the neighborhood has to offer.  While the neighborhood is now settled year round by residents, it did have simpler, historic beginnings.

Adams Shore sits on the land once belonging to the Adams family, which boasts two former presidents, John Quincy Adams and his father John Adams.  The land was later purchased and Adams Shore became a cottage and vacation area for many in the Boston area.  With the development of the automobile, the popularity of Cape Cod began to pull the summer visitors from Adams Shore.  Over the decades that followed, Adams Shore grew into a year round neighborhood once having its own elementary school (N. S. Hunting School).

If you are not familiar with the Adams Shore section of the city, stop by and visit the best kept secret in Quincy!